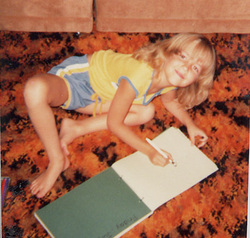 ,Andy has been creating artwork since she could hold a crayon, has been photographing since her early teens- thanks to the influence of her father, an avid hobbyist (photo left)- and loves to combine her creativity with global travel and exploration. Andy has a Bachelor's Degree from Eckerd College in Visual Arts (1995), and a diploma from Morris College in Sussex, England in Travel Writing and Photography (1998).

Andy grew up just south of Washington, DC in a small lake community of northern Virginia, traveling frequently with her parents and creating art in her spare time. After college in St. Petersburg Florida, she moved to Oregon in 1995, lived in Scotland for all of 1997, and has lived in Steamboat Springs since April, 1998. She loves snowboarding the slopes of Steamboat in the winter, hiking the many hidden treasures of the valley in the summer, and brings her Canon DSLR with her everywhere.

1994: Andy marches to the beat of her own drum, is a thorough researcher with a thirst for knowledge in all things, and is a savvy entrepreneur and small business developer. Her oldest company, AJDesign, developed her senior year in college,  incorporates her many skills in photography, calligraphy, web site design, social marketing, photo- and scrap-booking, and instructing on all of these subjects.

2002: But AJDesign isn't Andy's only (ad)venture. Andy also has a life-long thirst for alternative healing, and started her own practice, Innerself Lightworks, in 2002, which uses the many modalities of healing that she has studied since 1996 including Reiki, Quantum Touch, Crystal Healing, Astrology, Numerology, Feng Shui, and more. She teaches two annual classes in Crystal Healing and Synchronicity and speaks on the topic of crystals and energy regularly.

2003: Incorporating her love for travel and her degree in travel photography and writing, from 2003 to 2012, Andy was Director of Operations for Access Anything, a travel consulting business and resource for people with disabilities, through which she co-authored two travel guidebooks with her husband Craig respectively in 2005 and 2007, developed many adaptive sports camps in Steamboat, and consulted with top names in the industry. During those 9 years, Andy was published regularly in numerous adaptive travel and sports magazines.  View Andy's full bio in the field of accessibility consulting.

2008: In addition to travel, Andy has a keen interest in the future of sustainability and environmentalism, with a history in studying sustainable living since an internship after college led her to the Lost Valley Educational Center in Dexter, Oregon in 1995. She joined the Yampa Valley Sustainability  Council (YVSC) Board of Directors in 2008 and in 2011 she stepped into the Zero Waste Coordinator position for YVSC to manage events, races, and local initiatives that choose to reduce their impact on the environment by "Going Zero."  In 2012, Andy was promoted to Program and Marketing Director for YVSC, growing the many programs, events, and partnerships the organization fosters. View Steamboat Magazine's article on Andy. Andy stepped down from this position February 29, 2016, to pursue her mission to share healthy living around the world.

2014: As of August 2014, Andy joined the Juice Plus franchise to share Healthy Living around the world. After struggling to take better control of her compromised health for 5 years, Andy realized health wasn't about taking food out of the diet, but about adding more whole food in. Also burning out in the non profit sector, she was looking for a new (ad)venture, and is proud to have said yes to an amazing company, mission, and team. To learn more about Juice Plus and Tower Garden, visit her website here. Juice Plus is encapsulated produce that fills the gap between what we eat and what we should eat. The Tower Garden is an indoor/outdoor, small and sustainable, aeroponic growing unit. In 2016 she was promoted to Senior Sales Coordinator and is thrilled to be doing this business alongside her husband and amazing, growing team.